By LakaJune 1, 2021articles
No Comments

The body of Celloridoo is an aerophone made from maple wood which is coated with epoxy resin. The Instrument is 131,5 cm high. The challenge of the project is based on merging two instruments:cello and didgeridoo. ”In Celloridoo an aerophone which is Didgeridoo is composed with a bowed chordophone which is something like a cello. So a chordophone needs a peg box, a neck and a resonance box, and a Didgeridoo needs a pipe and a mouthpiece so the pipe under the mouthpiece became to peg box and neck to install fingerboard on int and the lowest part of it became to a resonance box to instal bridges, holes and keep the strings.” The project got appreciated with the A’DESIGN Award. The 2015 was a breaking through point for the Aidin, he invented a new instrument. Celloridoo is a hybrid – a combination of cello and the didgeridoo. 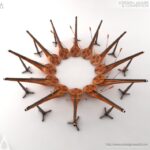 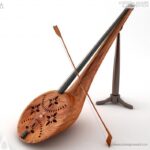 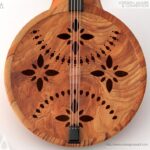 As the research abstract says “(…) designing a new composite musical instrument for the creative people who are talented in music is necessary to help these people make more creative musics individually and to involve them spiritually(…)”. The inventor of Celloridoo, Aidin Ardjomandi is a Tehran born creator who specializes in industrial design and is also a cartoonist. Aidin was 18 when he won several prizes in these two fields. He is also known for being a manager and lecturer of events in Istituto di Moda Burgo and is the international relations manager of Azerbaijan Design Awards. The artist graduated from the central Tehran branch of IA University and is also a member of the World Design Consortium, International Design Club and International Council of Creative Industries Alliance of International Business too. From 2019 he can be also found amongst the jury of Design Educates Awards.

We use cookies to measure and improve the performance of our site. All information these cookies collect is aggregated and anonymous. Please let us know if you agree to these cookies.

We've made changes to our Privacy and Cookies Policy according to the General Data Protection Regulation. If you will have any questions about the data protection in Laka's programs, please do not hesitate to contact us.

This website uses cookies to improve your experience while you navigate through the website. Out of these, the cookies that are categorized as necessary are stored on your browser as they are essential for the working of basic functionalities of the website. We also use third-party cookies that help us analyze and understand how you use this website. These cookies will be stored in your browser only with your consent. You also have the option to opt-out of these cookies. But opting out of some of these cookies may affect your browsing experience.
Necessary Always Enabled

Any cookies that may not be particularly necessary for the website to function and is used specifically to collect user personal data via analytics, ads, other embedded contents are termed as non-necessary cookies. It is mandatory to procure user consent prior to running these cookies on your website.